I have been on the boat for four days now and this is my last day. We´ve been sailing through the Canals, Locks and Lochs from Inverness all the way to Corpach which is a suburb to Fort William. Most days the weather has been nice and there has been little to no waves as we sailed. It was Monday and Tuesday which were the longest days of sailing, Wednesday we did no sailing as we had to wait for electrical fixes to the boat. The electrician, Bertie McMinn, was from Mallaig and he had formerly been the Cox in Mallaig Lifeboat. Instead we went on a trainride to Mallaig and Glenfinnan. In Mallaig we ate very good fish and chips at the Steam Inn, which were recommended by Bertie.  We also visited the nice small local heritage museum beside the train station, and found a good deal of interesting local history. There was also a photo of Bertie McMinn when he was in the Lifeboat, and he father, who also served in the Lifeboat, and his one or two other McMinn´s who looked older, and might have included a grandfather.

In Glenfinnan, we saw a monument to the Jacobites as well a a giant viaduct which you may have seen the Hogwarts train riding over in the Harry Potter movies. It was a nice walk from the station and back. While waiting for the train we had a local beer on the veranda of the restaurant – an original rail carriage from the 1950s.

Today we went down Neptunes staircase which consists of seven locks, and then a double lock down into the canal basin at Corpach. This took about three hours in all, including some time waiting for the road and rail bridge at Banavie to open. We also checked the electrical outlets again, and got some Calor Gas at the very helpful West Highland Gas in the industrial estate in Fort William. Indeed they delivered the gas back to the boat at no extra charge, allowing Karen and I to shop and catch the bus home directly to Corpach from Fort William.

The weather moved from sun to cloud, and got cooler at the same time. Since rain was forecast, we put on the cockpit tent to keep everything dry.  However, we have an excellent view of Ben Nevis, Scotlands highest mountain, from the boat. 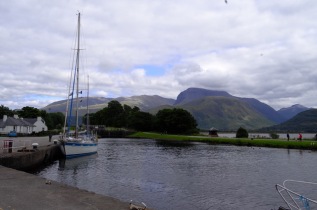 In order, Clockwise. 1. The Jacobite Memorial at Glenfinnan, 2. The Catholic Church, Glenfinnan (This area was more or less untouched by the reformation, being isolated, and remained predominately Catholic until the 1970s, and maybe still is, although there is no longer a resident Priest here, 3. Svalen at the Corpach sea basin, Scotland’s highest mountain, Ben Nevis, behind. 4. Morten and Karen on Glenfinnan Station 5. A selfie of Morten, Karen and Skip in Corpach.

One thought on “Crew Morten writes on Thursday, 19 July:-”