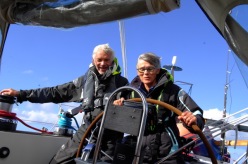 We left Falmouth marina in drizzly rain on Thursday morning 0900 or so. There was a good westerly wind once we got out, and we sailed on main and genoa, sometimes also staysail, until about the middle of the Bay of Biscay, at which point we lost the wind completely and plodded along under engine for a while. We got the sails back, but for a while were only doing 3-4 kts. For the first half of the journey, down to 46 degrees North, 7 degrees west, we were doing 7-9 knots, and thinking we would arrive at Muros, 25 miles after Cabo Finisterre, sometime on Saturday, which we had to revise!
We have seen whales blowing thier spouts, and some Dolphins, a large tuna fish that leapt right out of the water, and many ships heading North or South. The marine mammals are always a highlight. The weather has turned hot and sunny, and started feel decidedly southern. Everything is working well, although the rough seas for the first 250 miles or so brought on some seasickness that cleared up as crew got their sea legs back and the seas calmed down. Later we put on the parasailor because the wind came from the east, aft of abeam, in sufficient strength. This increased our speed to up to 6 knots.

We arrived in Muras at 9pm on Sunday 19th August, just about 84 hours after leaving Falmouth, all except 16 hours under sail alone.  our average speed was 6 kts and total journey length was over 500nm .

One thought on “Falmouth to Muros, Galicia”